If you can cope with the steep and slithery ascent, you’ll be rewarded with spectacular views 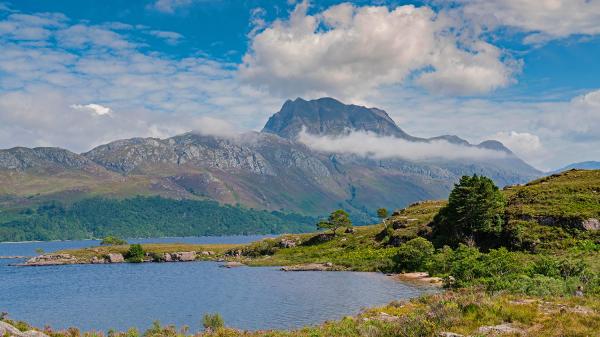 Beinn Eighe is a mighty mountain. It rises more than 1,000m at its highest point and presents an assortment of cliffs, screes, corries and buttresses. Scottish Natural Heritage has laid out a mountain trail to guide walkers who don’t mind a steep and slithery ascent on a circuit that takes in the top of one of the mountain’s eastern peaks.

Our path from Loch Maree rose beside a rushing stream through banks of bracken and bilberry. The forest here is of Scots pines, about 300 years old or more, their upper limbs bright orange in contrast with the ashen grey of their scaly trunks. We crossed the burn over a footbridge with a fine view back over the silty channels at the head of Loch Maree and the hump of Slioch mountain across the water.

Above the tree line the track climbed steep slides of marbly rock, crunchy with shattered shards of quartzite, to reach the cairn on the summit of Leathad Buidhe, “the broad yellow ridge”. The views made us gasp — back over the loch to the hills in the northeast, southwest to three enormous peaks of pale rock like the storm waves of a petrified sea — the northerly aspect of Beinn Eighe’s out-thrust fingers.

The cairn stood sentinel over an upland of bog and lochan, shiny black crowberries and shell-burst clumps of orange-tipped deergrass — a place where the only sounds were the cheeping of meadow pipits, the raspy sigh of wind among rocks and a faint subterranean chatter of running water.

A quick, cool dip in the peaty waters of Loch Allt an Daraich under the black-browed hummock of Meall a’Ghiubhais, “pine-tree hill”. Then we followed the path across the moor to where it dropped steeply downhill beside the tumbling water of Allt na h-Airighe. 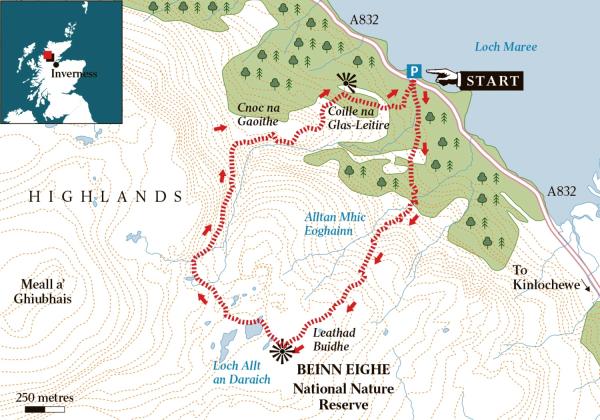 The stream fell down into a dark, deep cleft, a fault torn open by giant convulsions millions of years ago. We gazed down this crack in the face of Beinn Eighe before descending among resin-scented pines already beginning to drip with the afternoon’s shower.