Home > Arts and Culture > Ed Ruscha, the pop painter with ‘the coolest gaze in American art’ 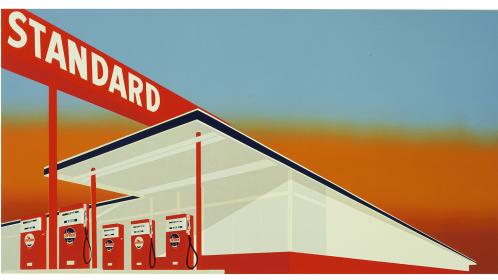 In the quiet of a vast studio I am waiting to hear how one of the world’s great artists would have responded if somebody had suggested when he was young that art might be a viable long-term career for him. Ed Ruscha breaks into a broad grin that lights up his craggy, handsome face.

“I would have said ‘absurd’,” he replies, stretching out the word. “Most of my friends and people who were artists were quite happy to make art for the sport of it. There was no hope for making it into a vocation. Not even really a thought.”

Los Angeles, his adopted city, was a backwater in the late 1950s — “the Australia of the art world”. Ruscha worked at multiple jobs, printed business cards that showed how to pronounce his name (“ED-WERD REW-SHAY”) and managed to do rather more than survive. In 2013 Time magazine featured him on its annual list of the 100 most influential people in the world. By then, his images of petrol stations, the Hollywood sign, car parks, apartment buildings, streets and smog-frazzled sunsets had established a graphic language for southern California at least as potent as David Hockney’s shimmering swimming pools. His impact, though, goes far beyond what the author JG Ballard called “the coolest gaze in American art”.

With his sardonic use of words in his pictures, his low-fi artists’ books and his printing experiments with caviar, Pepto-Bismol and the contents of a shopping trolley, Ruscha seized a secure but unclassifiable spot in the art universe somewhere between pop art, surrealism and conceptual art. And he did it while exuding movie-star charisma. He dated models and actresses and appeared, in his seventies, on GQ’s list of the ten most stylish men in America. When the Fine Arts Museums of San Francisco made a film about him to accompany a key retrospective last year, they called it: Who is Ed Ruscha (And Why is he So Damn Cool?).

Next month, Ruscha’s work will be at the heart of a show at the British Museum. The American Dream: pop to the present will use the medium of printmaking to track the key developments in American art during the past six decades. Artists in this era have sought to produce work that, in the words of Claes Oldenburg (whose giant Three-Way Plug sculpture is featured in the show), “does something other than sit on its ass in a museum”. Because prints were cheaper than paintings and designed to be reproduced, they became critical to the success of that mission. The 70 artists selected include Jasper Johns, Andy Warhol (whose Marilyn will be on display), Roy Lichtenstein, Cy Twombly, Louise Bourgeois, Kara Walker, Robert Rauschenberg — his rocket-sized Sky Garden will be another highlight — and many other giants of contemporary US art.

For Stephen Coppel, the curator of modern prints and drawings at the museum, Ruscha is the equal of any of them. He has been a fan since the 1980s, before Ruscha had widespread recognition, and says his fantasy acquisition would be the 1966 Ruscha image of a petrol station in Texas, coming on loan from the Museum of Modern Art in New York. It’s the “off-the-shoulder nonchalance” of Ruscha’s work that appeals to Coppel. “The wit and the economy. It looks like he hasn’t been straining.”

It’s hard to imagine that the man who greets me one wet afternoon at his Culver City studio has strained at anything. Ruscha is wearing a checked shirt, cargo trousers and slip-on trainers. His grey-blue eyes are simultaneously welcoming, amused and vigilant, and his silver hair sprouts in Johnny Hallyday rocker curls. He walks unhurriedly, if a little stiffly, talks in a gravelly western drawl and laughs a lot.

The warehouse-sized space is divided in three: a kitchen and dining area with tables and mismatched chairs where Ruscha makes me coffee; a work area with paintings of mountains and mattresses; and a library section where we sit in carved wood and leather chairs near a surfboard customised with large gothic letters that read: “The End”.

Ruscha comes to work “virtually every day” and is sometimes productive, sometimes just awaiting a train of thought to “hit me in the direction of doing something”.

Most of my work comes out of popular culture. I can’t deny that. So call me a pop artist

“I could say I waste time, very easily,” he says. “But it’s all visual language.” He gestures at the books, maps of Mexico and stickers of Mexican fish on the marble table in front of us, some of it relating to a planned fishing holiday with his grandchildren. “I got piles of things here, and each and every one of them is worthwhile.”

At 79 he is still breaking fresh artistic ground. He pads through his studio, followed by his shaggy rescue dog Lola, to a table where he opens a large flat cardboard package. Inside is a horseshoe-shaped length of clay with a series of laser cut metal letters sticking out of it, like birthday candles on a cake. The letters read: “WEN OUT FOR CIGRETS N NEVER CAME BACK”. It’s funny, baffling and characteristic of an artist who says he aims for “a kind of ‘huh?’ ” effect with a lot of his work. It is also something new. Once cast in bronze it will become, Ruscha says proudly, his first sculpture.

Some artists are uncomfortable discussing their work and wary of being slotted into categories. Ruscha is not like that. Labels, he says, are “so fleeting anyway. Most of my work comes out of popular culture. I can’t deny that. So call me a pop artist.”

That’s not to say that he’s straight- forward. I ask about the humour in his work, evident in paintings such as OOF, a large cobalt-blue canvas featuring those three letters in bright yellow across its middle. Humour has always been present in art, he says, citing the work of the 18th-century British cartoonist Thomas Rowlandson. When it comes to his own pictures, though, “I don’t consciously think of injecting humour . . . that’s just not part of it. If somebody finds it funny or ironic or whatever, I’m not sensitive about that. There is no particular way to interpret my art. I mean, some artists get upset if you don’t see their view of things and that makes them very insulated people — they don’t realise that once you make a work of art it’s open for interpretation and the viewer brings something to it.”

More than 60 of Ruscha’s works have sold for more than $1 million. Is money important to him? “Wow,” he says. “It must be if I accept it. I continually ask myself, if the bucks come in, I’d like the bucks to go back out in a way that services my art.” He spends some of it on sending teams of people to photograph great chunks of Los Angeles for him. He hopes one day to figure out what to do with all the pictures.

Ruscha was born in Omaha, Nebraska, and grew up in Oklahoma, “a place that people fly over”, where his father worked in insurance. He imagines life there now as “like a black-and-white movie”. At 18, he left, driving west with a friend to LA. That 1956 trip on Route 66 left an indelible impression on his art. “I’m a variation on a theme and the theme was started at maybe age 18. Everything I do is somehow connected to that same basis of thinking.”

Ruscha came looking for “hotrods and chicks”. He found them, but also fell in love with the palm trees and streets and the “sparkles and spangles and Hollywood, great neon signs, stuff like that”.

Art school taught him that he did not want to paint like Jackson Pollock, but by 1962 he was one of eight young artists, among them Warhol and Lichtenstein, in the first museum show of American pop art, held in Pasadena. The next year Ruscha had his debut solo show. One of the paintings sold to the actor Dennis Hopper, among the very few Hollywood figures of the era interested in contemporary art, and they became friends. In New Mexico they once “went out shooting guns together” at a time when Hopper’s paranoia had convinced him that he was being pursued by the CIA. “He went through some crazy stretches,” says Ruscha, who does not believe that suffering is essential to great art.

These days the showbusiness world is bound closer to LA’s thriving art scene. He recently finished a painting for Leonardo DiCaprio, star of The Wolf of Wall Street. It says “Alpha Wolf”.

There’s a touch of Hollywood to his home life too. Ruscha lives in the former residence of the talent agent Irving “Swifty” Lazar. Ruscha’s wife, Danna, used to work as an animator on The Flintstones. They met in 1965, married in a Las Vegas chapel in 1967, divorced, then remarried in the same chapel in 1988. “We have a son together [Eddie, who is now almost 50]. Maybe that had something to do with sticking together.”

Ruscha made his own experimental films in the 1970s, but was put off by having to “co-operate with so many people”. Working alone suits him better. “I don’t get bored, ever,” he says, eyes widening.

He loves baseball, boxing and music and is evidently a sociable man. His favourite place, however, remains his bolt hole in the desert, a three-hour drive away, where he goes with Lola “every couple of weeks”. He rarely makes any art out there, he says. “It’s amazing how your time can get chopped up by events of plain living.”

As befits a man who takes words seriously, Ruscha has lately found himself intrigued by the White House’s use of the term “alternative facts”. The Trump presidency “disgusts me”, he says. “But I’m not going to change my art to voice my feelings about him. I mean, there might be underlying anger behind things that might be hiding in one of my pictures but it’s not going to be advertised. My work is more about the progress of an accelerated city and an accelerated lifestyle. It doesn’t contain the problems of politics.”

Plenty of critics would disagree. Ghost Station (2011), in the British Museum show, reprised one of his famous 1960s petrol station pictures but drained it of all colour, so that the underlying pencil marks were exposed. Many people read it as a statement about American decline. Wrong, says Ruscha, who speaks with the permanent hint of a wry grin. “It just happens to be a bunch of zoomy lines that I like.”

He’s not sure that he’s as good as he once was. He cites his 1963 picture Noise, Pencil, Broken Pencil, Cheap Western, which featured the word “Noise” in 3D lettering and photorealistic depictions of the pencils and a comic book against another blue backdrop. “I always felt like that was my best painting,” he says. “Maybe I should stick with that.”

We wander outside and watch the rain falling on the citrus trees and avocados that he has planted behind the studio. Out of sight, the Los Angeles River rages. What makes you laugh, I ask. Ruscha answers instantly in the darkness. “Everything that goes on in the world.”